Last week in our blog we told you about MMR, victory, and how those are two very different things. We told you that 28% of success in the CEA is not your game skills, but your people skills. Today, we will answer the invariable follow up question: Great, what ladder do I grind to talk to people better?

Well, you could try a personality test. Sit your team down, ask yourself what kind of kitchen utensil you are, and see if you can complete the whole dinner table. Of course, the problems with personality tests are well documented, and how seriously do you, as a leader, suspect your team is going to take this test one hundred questions into a two hundred question survey?

If you wanted to get more scientific, you could try sentiment analysis. Record your team's voice activity, transcribe it to text, and then parse it. CEA has certainly done studies like this. The problem we ran into with sentiment analysis was how much meaning was conveyed outside of the keywords that sentiment analysis uses to do its job. Words like "yeah," "right," and "sure" can mean a lot of different things based on their context and how they're said. We've included a chart below of the most common words used during a few practice sessions that we measured. 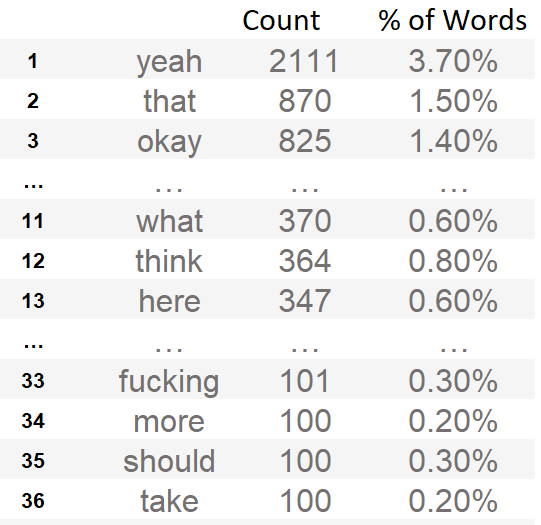 About six months ago, CEA was lucky to acquire CEA | Mark, a data scientist who focuses on natural language processing. We told him we wanted to show teams how they were communicating so they could take that information back to the real world and be better both in-game and out of game. Mark was happy to oblige.

Mark taught us to think of each granular piece of new information as a ball being passed around a team. Every time your hands touch the ball, you learn the information that ball represents. Sometimes you learn on the first catch, sometimes you need the ball thrown to you a few times before you get it - and if you don't know that the ball is directed at you, it may get dropped. Effective team communication is the art of passing around that ball for each new piece of information.

Everybody contributes to the ball's movement. The first person to introduce new information gets amplified by someone who recognizes that information is important. Someone who understands the game suggests a course of action, and a leader makes a decision about whether or not to follow that plan.

By listening to CEA teams communicate during their matches and games, we were able to break communication down into discreet categories, which we call the five factors. Mark was right - we found ourselves easily able to describe team dynamics by referencing only the five factors. We knew early on that all we had to do was help individuals comprehend their role in their team, and any corrective actions necessary would be immediately apparent.

The other important data we were able to extract was what we call the flex. Our behavior changes around other people - we adapt to our circumstances. Flex captures the way people are capable of adapting to make their teams work. The chart below, captured from real CEA competitors, is an example. 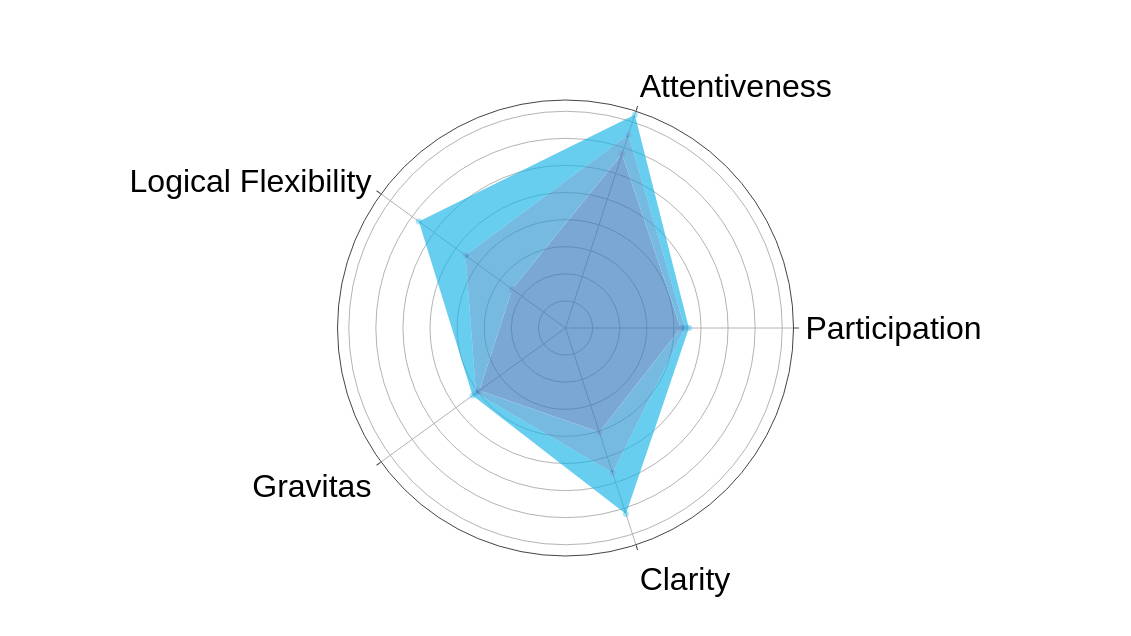 This person is the Dragonborn. With such a high attentiveness score, this person is a great listener, frequently amplifying the thoughts of others. When they speak, their words are clear,  standing out for their rarity. While they are not a leader in their own right, a leader could not function without people like the Dragonborn.

Did we name them well? Tell us in the comments, or on Discord. We can't wait to share this broadly with the whole CEA.

But how powerful is this model exactly? How does it make you perform better?

That's a story for next week.

Spring 2022 Wrap Up and Giving Report

Fall 2021 Wrap Up and Giving Report

Spring 2021 Wrap Up and Giving Report